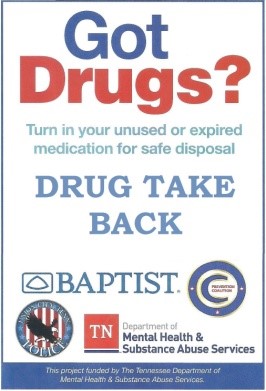 The departments are unable at this time to accept syringes or other types of drug paraphernalia.
A Drug Take Back receptacle is located in each police department main lobby.
Many people are unaware that medicines that languish in home cabinets are highly susceptible to diversion, misuse, and abuse. According to the DEA, rates of prescription drug abuse in the U.S. are increasing at alarming rates, as are the number of accidental poisonings and overdoses due to these drugs. Studies show that a majority of abused prescription drugs are obtained from family and friends, including from the home medicine cabinet. In addition, many Americans do not know how to properly dispose of their unused medicine, often flushing them down the toilet or throwing them away-both potential safety and health hazards. Municipal water systems are not able to properly filter many medications, which sometimes leads to the presence of medications in tap water. Traces of prescription medications have also been detected in streams and other ground water sources.